These keto-friendly cinnamon rolls were inspired by a southern woman who just ran her first 5K and isn't stopping there!  Terri and Toni co-host a keto-diet friendly Facebook live cooking show that is as hilarious as it is delicious. Check it out here: https://www.facebook.com/sistersbreakingbad/.  I promise you will learn something as much as you will fall in love with the hostesses. 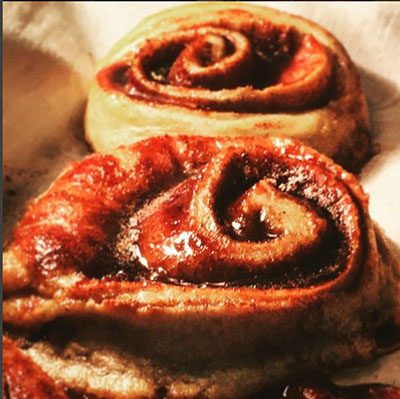 Mix mozzarella cheese and MCT Oil together in a medium-sized bowl. Melt this in the microwave by cooking for 2 minutes, checking every 30 seconds until just melted (avoid crisp edges by stirring regularly).

Mix in the egg to the dry mixture and then mix in the melted cheese mixture until sticky.

Coat 2 parchment paper pieces with butter, making sure to size them accordingly to a quarter sheet pan.

Place one buttered parchment paper on the quarter sheet pan, butter side up, and place sticking dough on top.

Cover with the other layer of parchment paper, butter side down.

Place another quarter sheet pan above this sandwich of paper and dough, and PRESS HARD! This will flatten it out.

Combine the cinnamon and 'sugar' ingredients.

Sprinkle heavily on top of the dough (after removing the parchment paper of course).

Roll the cinnamon rolls as tight as you can without ripping the dough (okay if it does).

Cut these 2" thick and place on parchment paper to bake.

While the cinnamon rolls are cooling, chill the heavy cream and cream cheese.

Beat the cream cheese and heavy cream on high until fluffy.

Mix in sweetener and cover the cooled cinnamon rolls with icing.

* Percent Daily Values are based on a 2,000 calorie diet. Your daily value may be higher or lower depending on your calorie needs.